If one were to go to the Lightning High School Hockey League (LHSHL) statistics and leaderboard page, you might notice that the name “Davis” appears in several of the LHSHL leaderboard categories. That particular skater happens to be Josey Davis, who is the team captain for the Wiregrass Ice Hawks this season.

Davis leads Wiregrass with 32 goals and 14 assists for a total of 46 points in just 14 games played for the 2017-2018 LHSHL campaign. The six-foot-four defenseman has already surpassed his goal total of 30 from last season, and is on the verge of helping Wiregrass clinch another berth in the LHSHL Playoffs this year. While his stats are impressive, it was apparent after meeting with the Ice Hawks’ captain, and speaking to his peers, that Josey is a true competitor and leader who will put the team first before himself.

“Honestly, winning games. That’s all I care about,” said Davis when asked what he takes most pride in out on the ice. 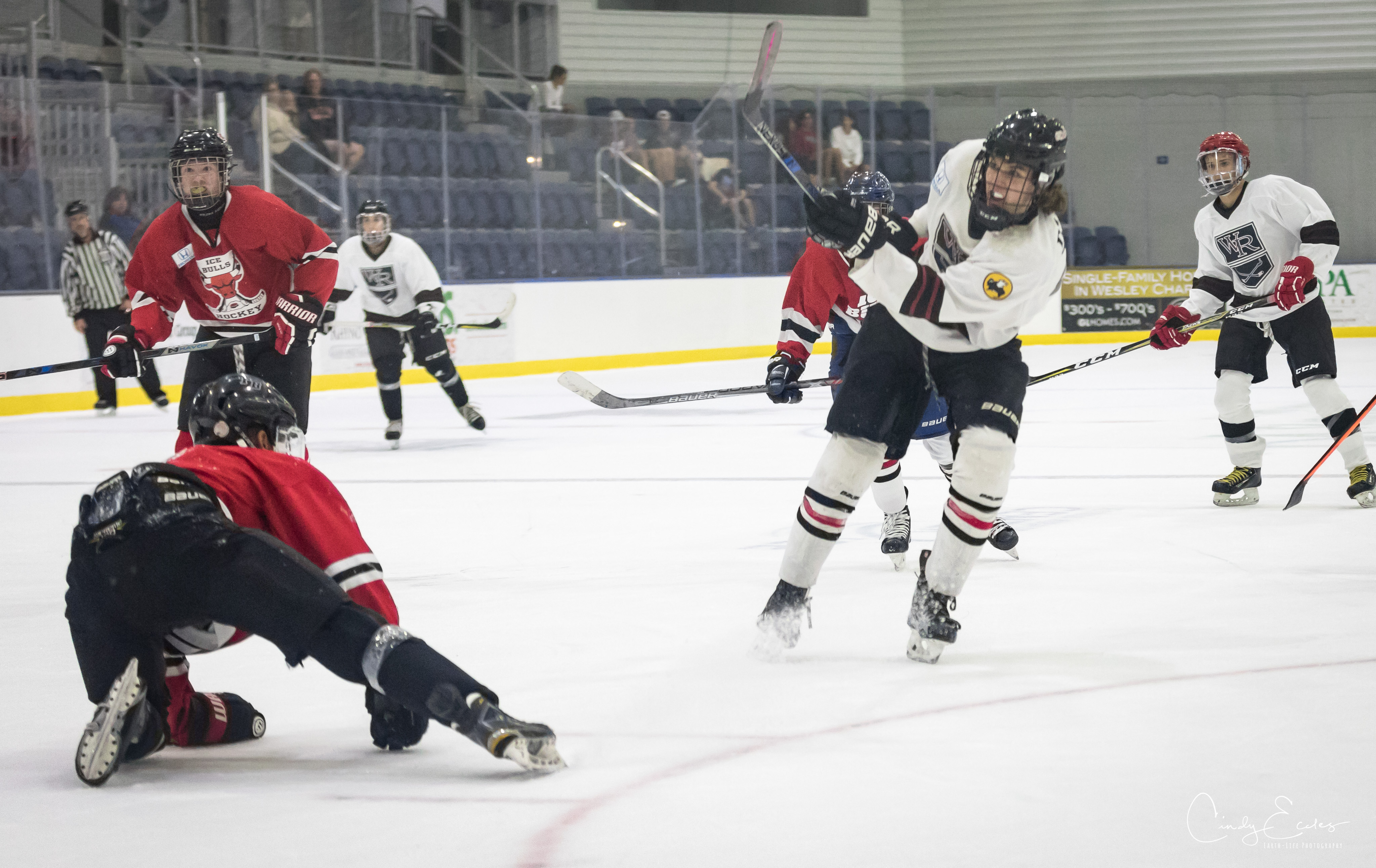 One could tell how serious Davis was about that statement above, after he continued to emphasize just how important it is for his team to win.

Davis has skated with Wiregrass for each of the past three seasons, while playing for Head Coach Gordie Zimmermann. Speaking of Zimmermann, the Wiregrass coach was asked what impresses him most about his senior captain -- aside from his notable skill assets on the ice.

“(Josey) has great leadership skills,” said Zimmermann. “He is also very respectful of others and his coaches. He has a calm and relaxed attitude, but knows when to turn the ‘jets’ on when needed.”

Yet, Zimmermann also made sure to note the dynamic skater’s talents as well.

“First, Josey is six-foot-four tall, and has always produced big plays due to his reach, size and ability to skate. This is a rare talent to have all the tools,” said the Wiregrass Head Coach. “His strength has improved dramatically, and when we took him to Montreal Meltdown last spring -- many scouts were asking about him.”

Keep in mind that No. 21 for the red, white and black also helped lead the Hawks to the LHSHL Cup Finals last season against the Mitchell Mustangs. While Davis’ squad came up short for the LHSHL Cup, the Hawks met the Mustangs again in the State Championship for Florida – when Davis displayed quite the showing. 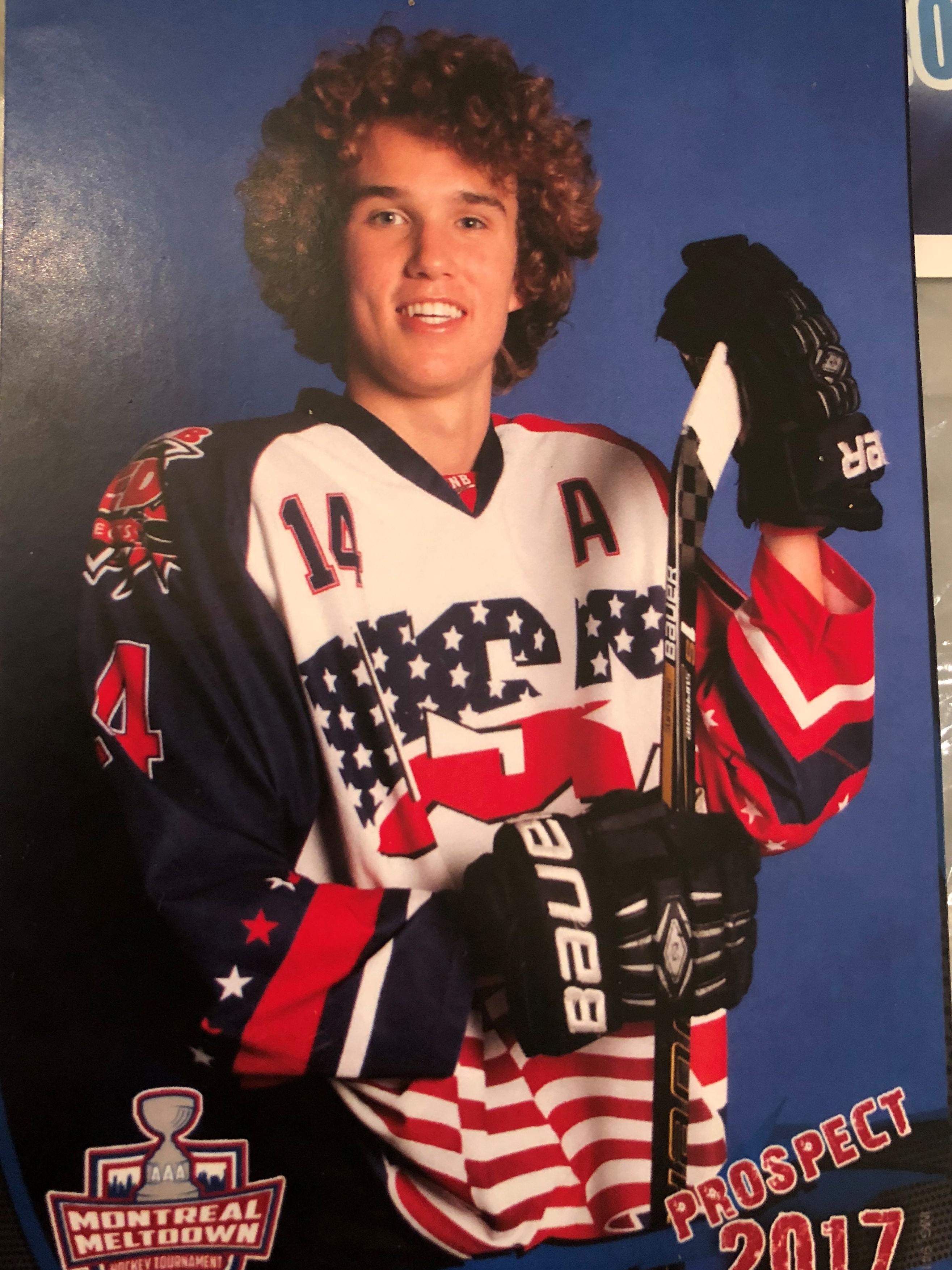 “His determination in last year’s state Championships vs. Mitchell when he scored twice to take the ‘big game’ to overtime,” said Zimmermann when asked which memory he would never forget about Davis’ playing days here in Tampa. 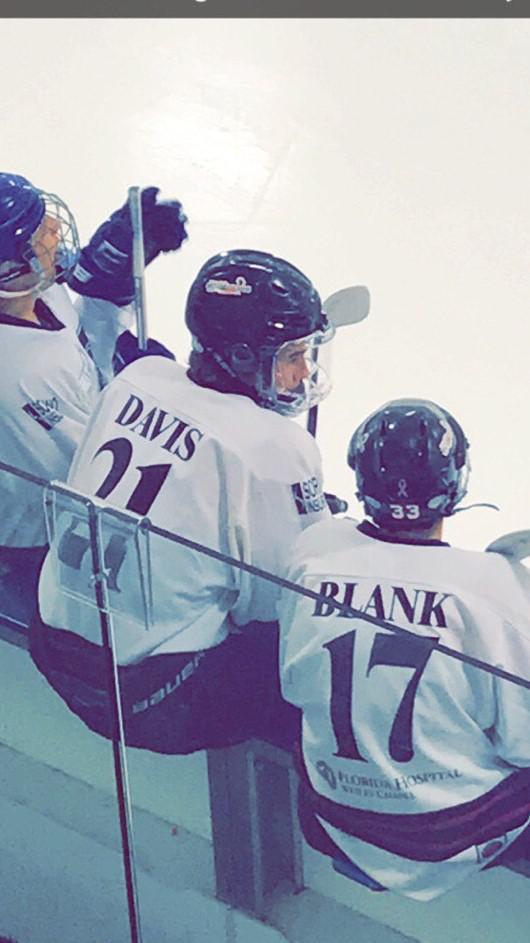 Yes, Davis has been an assistant captain before in the past, but the youngster is donning the coveted captain’s “C” for the first time; and he did acknowledge that it has been a valuable learning lesson and enjoys the challenges that the responsibility may entail at times.

“I learned that ‘hey these are my guys,’ and I needed to learn how to communicate and help others out by using my talents, and learn to help others as well -- to get the team better as one,” said Davis. “It’s been eye opening, for sure.”

After speaking with him on this subject, any athlete could appreciate Davis’ demeanor towards being a teammate and his dedication at getting better as a group, too. “You need to get everyone to work hard – if you have a hard work ethic then you’re automatically respected by everybody or most people at least.”

Even on the other side of the ice, Jesuit Tigers’ Kyle Repar of the LHSHL recognized and appreciated both Davis’ uncanny way to communicate with his teammates and his talent on the ice. Keep in mind that while Repar and Davis’ respected High School teams could be considered division rivals (Andreychuk Division), the two have played travel ice hockey together in the past.

“His biggest strength as a teammate I would say was probably his ability to make everyone laugh,” said Repar of his former teammate. “No matter what the situation was he never took anything too seriously, and he always kept the locker room relaxed and in a good mood. He definitely knew how to rid the team of any tense situation or nervousness.”

While Repar wasn’t shy about complimenting Josey’s offensive talents, puck handling skills and efficient skating abilities – Jesuit’s own offensive threat also chimed in on what it’s been like to now compete against one of the Tampa Bay area’s top High School level skaters.

“Playing against him in the LHSHL has made me realize how dominant he really is,” said Repar. “With his speed and his long reach, if you let him come around the net untouched, than he is going to go end-to-end, and you just have to hope he misses the net.” 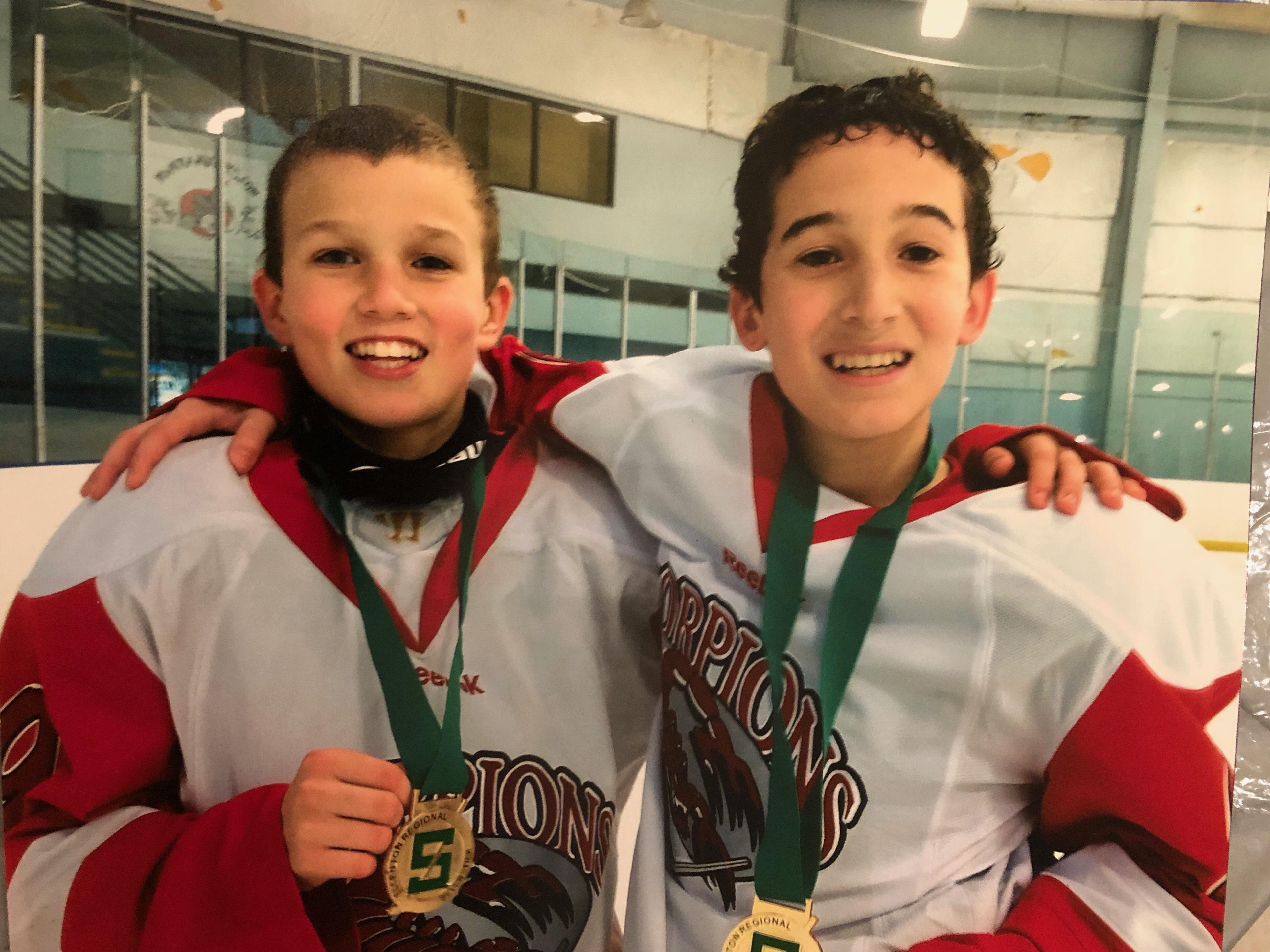 A young Davis and Brink with the Scorpions

There should be no surprise in the fact that a majority of the LHSHL and Wiregrass’ opponents would backup that statement made by Repar above. 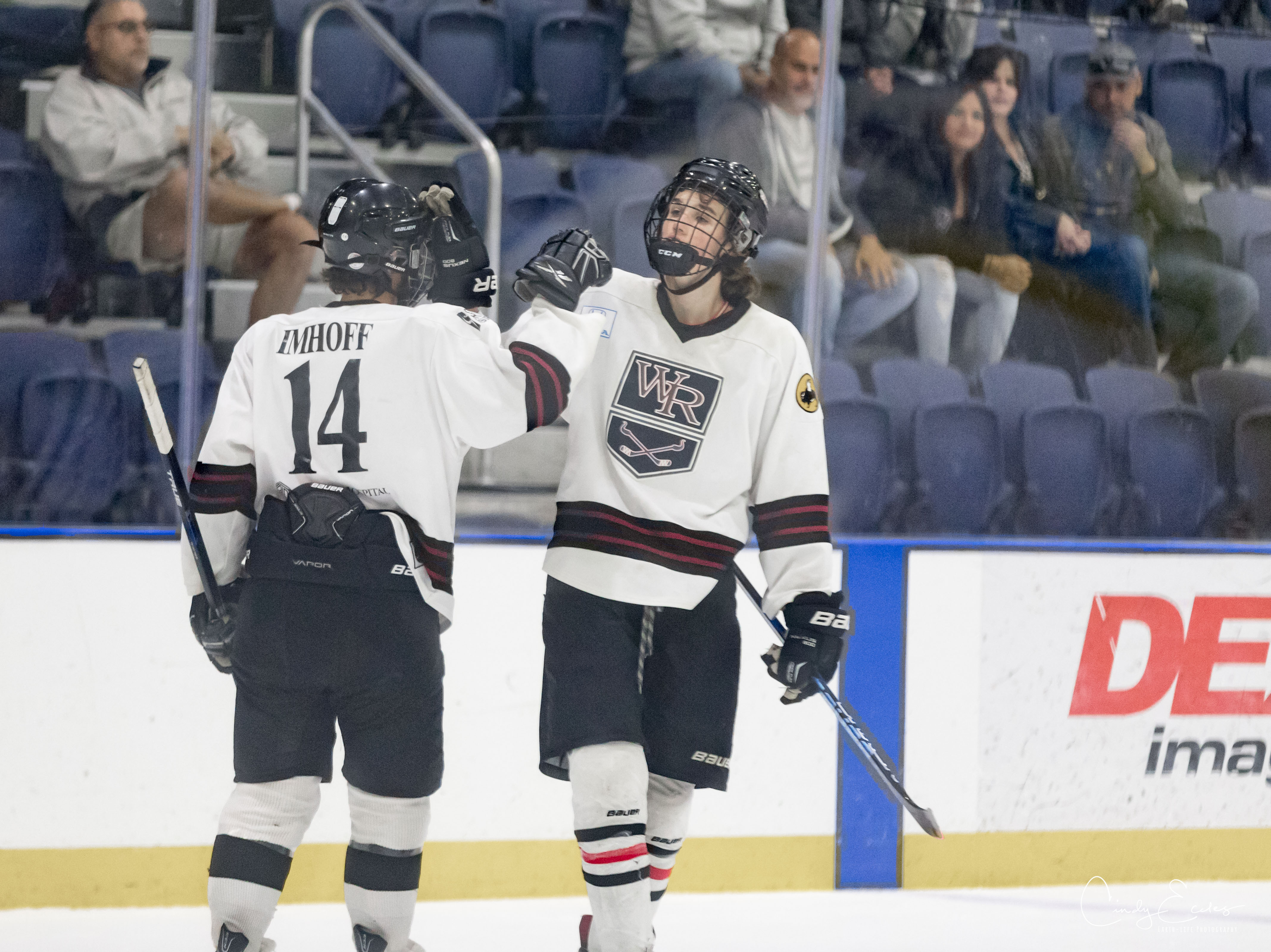 Yet, what may come as a surprise to most, is that Davis plays two different sports and during the same seasonal time frame. Davis plays Varsity Basketball for Tampa Catholic, and has excelled just as much on the court – as he has out on the ice.

The hockey goal-scoring machine picked up playing competitive basketball in middle school, and hasn’t looked back since. In addition to playing for Tampa Catholic, Davis also brings his competitive attitude and admirable work ethic to the court with the Tampa Bay Hawks (Amateur Athletic Union; AAU).

“Josey's biggest strength on the court is definitely his mental and physical toughness,” said Tampa Bay Hawks Head Coach Byron Lane. “Josey is fearless and he doesn't back down from anyone. His toughness spreads throughout the program.”

Davis even suggested that playing ice hockey over the years has helped him on the court with his basketball skills, too.

“Hockey has helped me more with basketball, than basketball has helped with hockey, because hockey is just such a tough sport,” said Davis. “It’s always quick decisions out there, quick everything…it’s almost indescribable. Hockey is just amazing.” 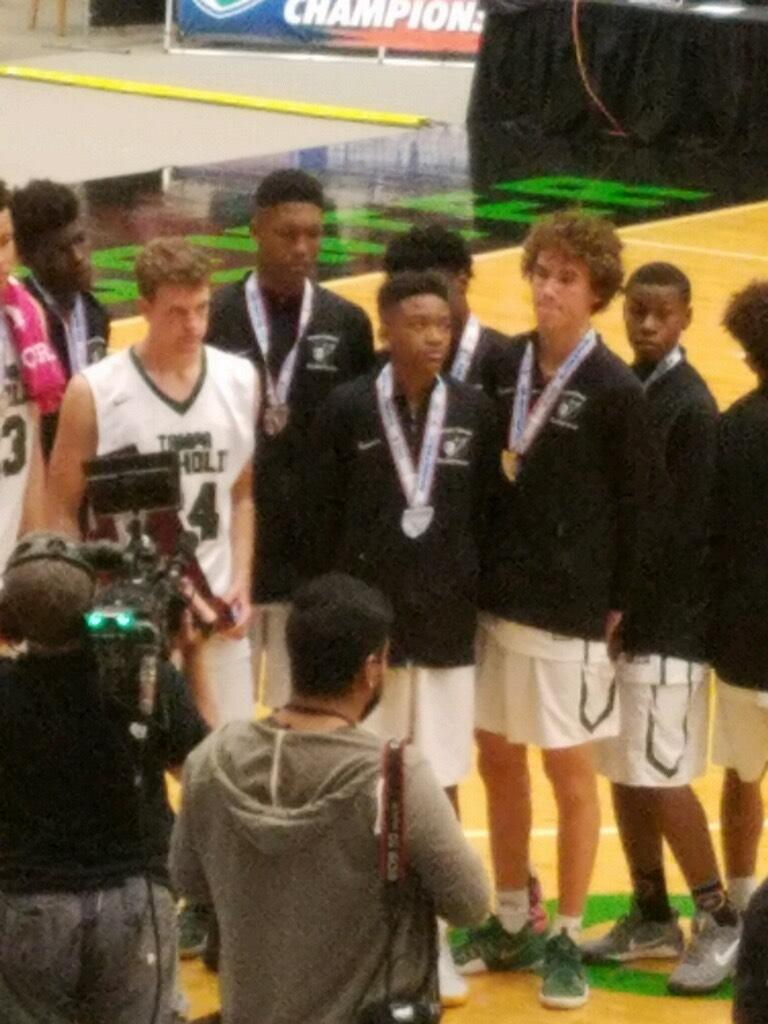 Similar to Davis’ hockey coach in Zimmermann, and his fellow hockey brother in Repar, Lane couldn’t help but commend the young athlete’s ability to grow as a leader with his AAU teammates.

“Josey is, ‘The Inspirer’,” said Lane. “(He’s) enthusiastic, idealistic and creative; and he’s able to do almost anything that interests him; great people skills; open minded and flexible with a broad range of interest and abilities.”

In the classroom at Tampa Catholic, Davis explained that he’s taken great interest and learning in courses such as Accelerated Prep (AP) Computer Sciences and AP Psychology, and he also plans on attending a four year collegiate institution next year.

When asked if Davis had any other hobbies, bearing if he had time with his busy athletic and school schedule, he did laugh and hint about being a good ping-pong player.

“I play a lot of ping-pong; I must say I’m pretty good at it,” said Davis with a smile that was arguably bigger than the state of Florida itself. “I’ll challenge anyone in the league if they want.”

It doesn’t seem to matter whether Josey Davis is on the ice in a big game-situation with his own team’s net empty, or has the ball in his hands with seconds remaining on the basketball court, his cool and calm attitude seems to only have a positive impact on his teammates and coaches.

Davis also made it apparent how fortunate he is for his teammates.