Find out what the LHSHL Game of the Week is & more

The Lightning High School Hockey League's (LHSHL) First Shift for Week Thirteen previews all eight of the league's games this Friday night. Additionally, Week thirteen entails five divisional matchups, plus Plant and Durant will face-off in the LHSHL Game of the Week. 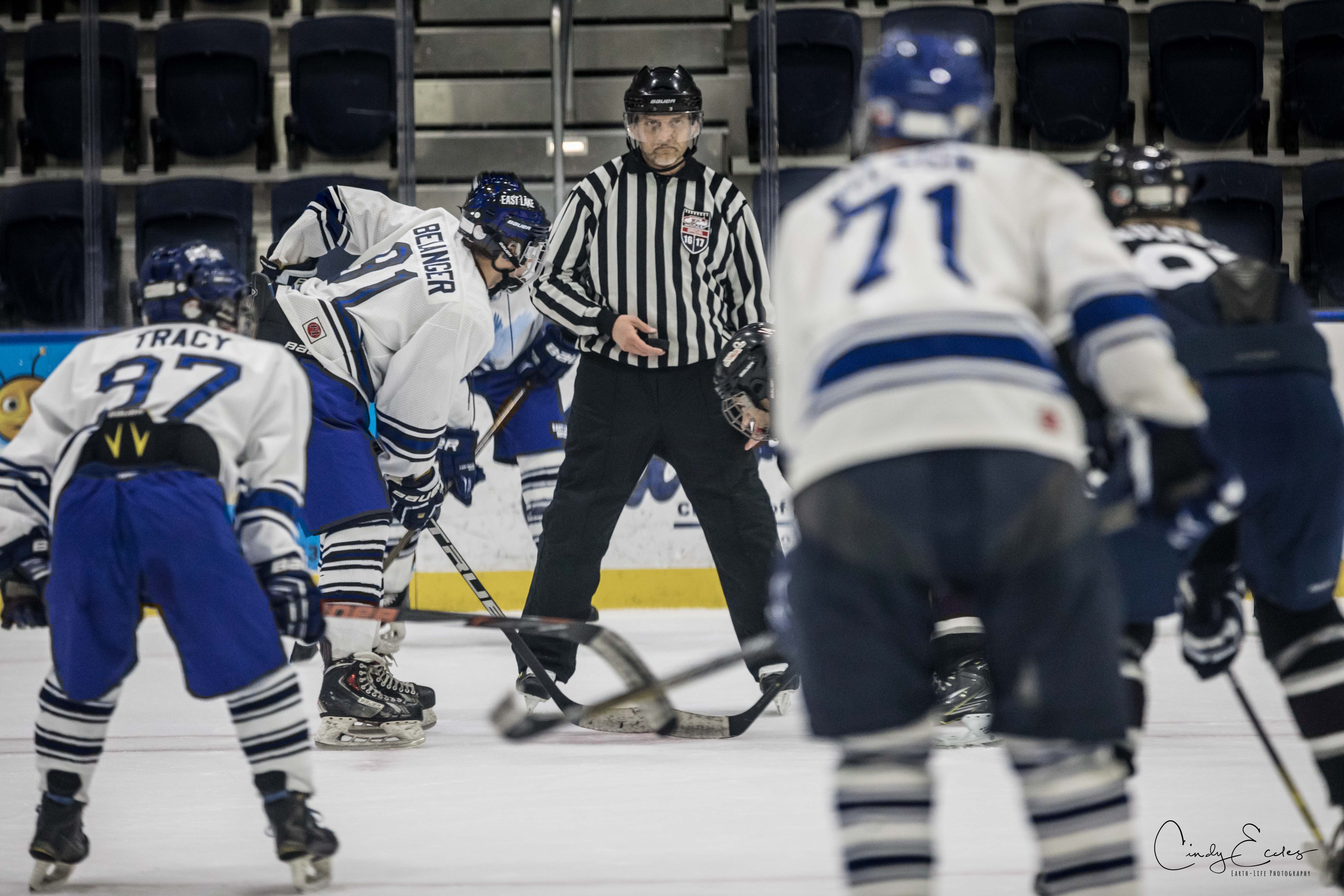 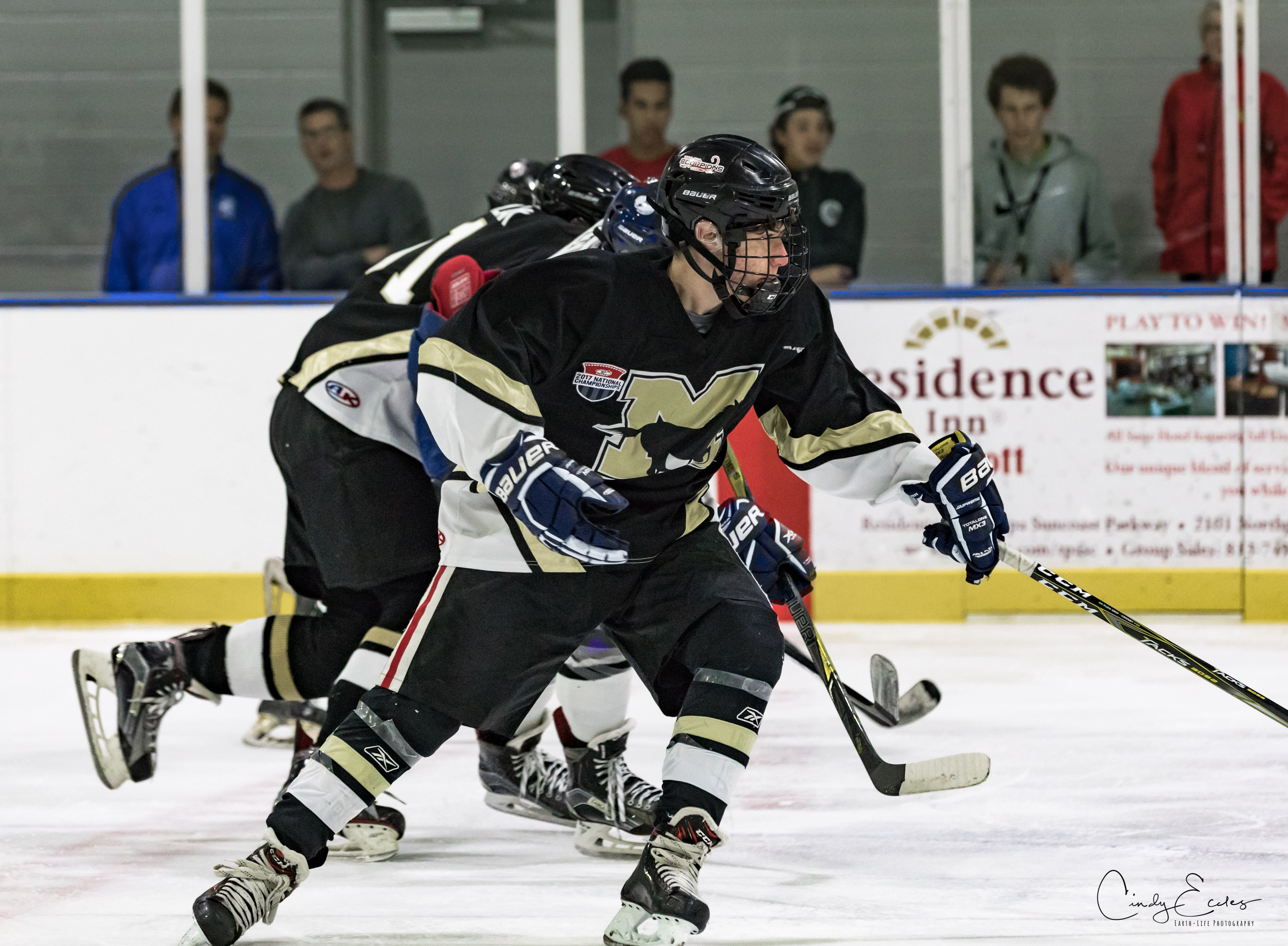 For the second time in one week the East Lake Eagles and Mitchell Mustangs will face-off in a Bradley Division showdown, and at the Clearwater Ice Arena (CIA) for a 7:00pm puck-drop. In the duo’s last meeting at the Tampa Bay Skating Academy (TBSA), the Eagles defeated the Mustangs by a score of 3-1. Though, the scoreboard read 2-1 for a majority of the contest.

The loss ended Mitchell’s impressive seven-game winning-streak, as East Lake separated itself by seven points from Mitchell (first place) in the division standings. Mitchell's Nicholas DeMiceli (15G-5A – 20pts) will look to get lead his Mustangs and remind the Eagles that Mitchell is the two-time defending LHSHL champion.

Still, East Lake’s leading scorer in Justin Garr (22G-23A –45pts) wasn’t present for the last matchup, and one could be sure that the senior will be eager to get back on the score sheet. It will also be interesting to see who starts between the pipes for both teams; Anthony Samarkos stood tall in the blue paint for the Eagles last week, and Jacob Serpe started for Mitchell in the loss.

The George Jenkins Eagles will look to bounce back after the team’s loss last week, as the Green and Gold take on a division rival in the Wiregrass Ice Hawks at Florida Hospital Center Ice tomorrow night (8:00pm). The contest marks the second of three meetings between the Andreychuk Division foes this season, as the Eagles defeated Wiregrass back on November 3rd by a score of 9-2. George-Jenkins will look to rekindle those winning memories, and try to jump Wiregrass in the standings to regain second place. Yes, the Eagles are on a three-game losing-streak, but senior forward Luke Rouleau (22G-6A --28pts) could potentially have a breakout game and get his Eagles back on track.

Still, let’s not forget that on the other side of the rink – Josey Davis (29G-13A – 42pts) was not present for these two team's last meeting. Davis is currently one of the league’s leading goal-scorers, and has the ability to single handedly take over a game. Additionally, Wiregrass is fresh off of a 7-4 victory against Newsome and that momentum swing for the team could play a big factor in this Andreychuk Division showdown. 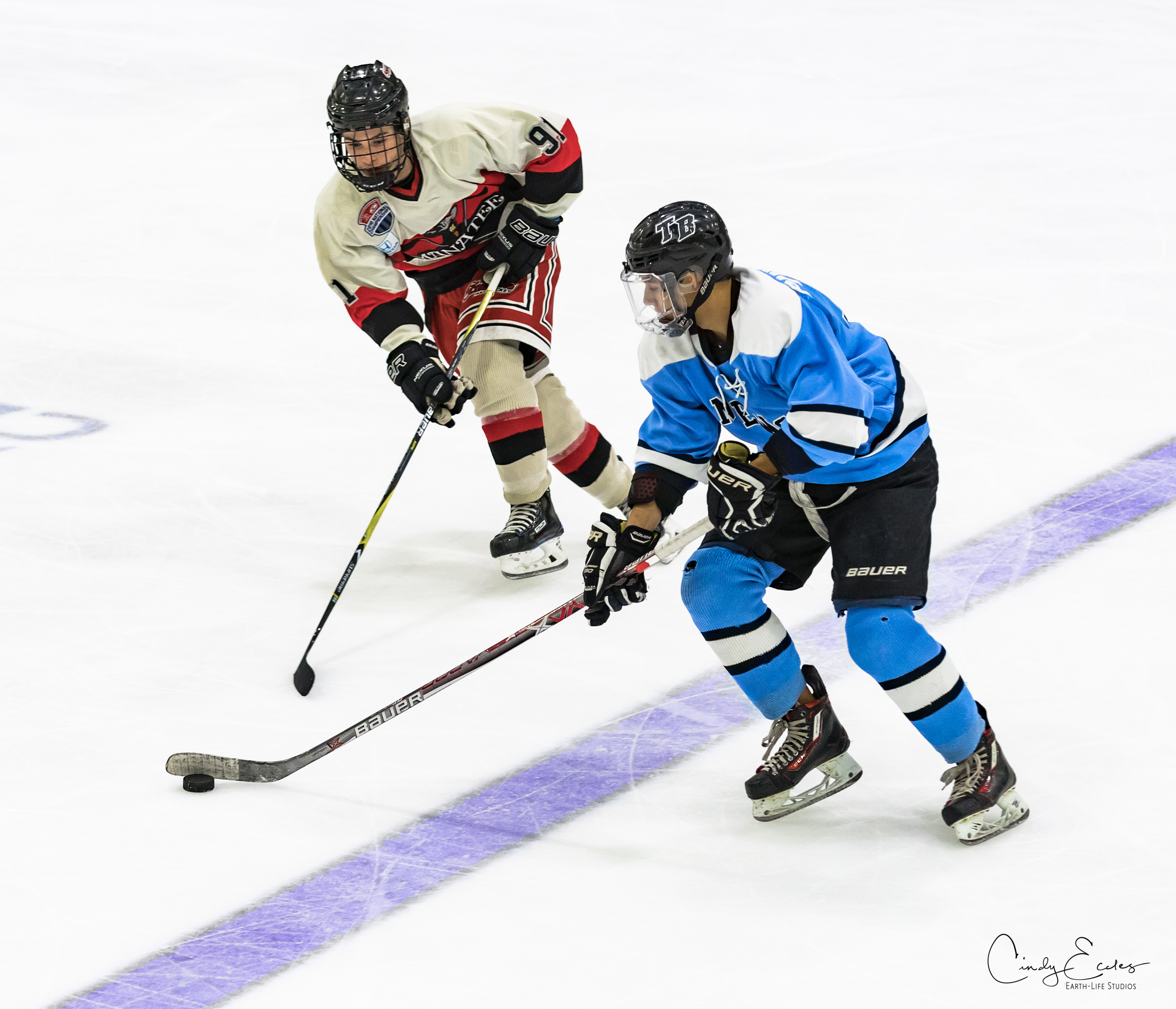 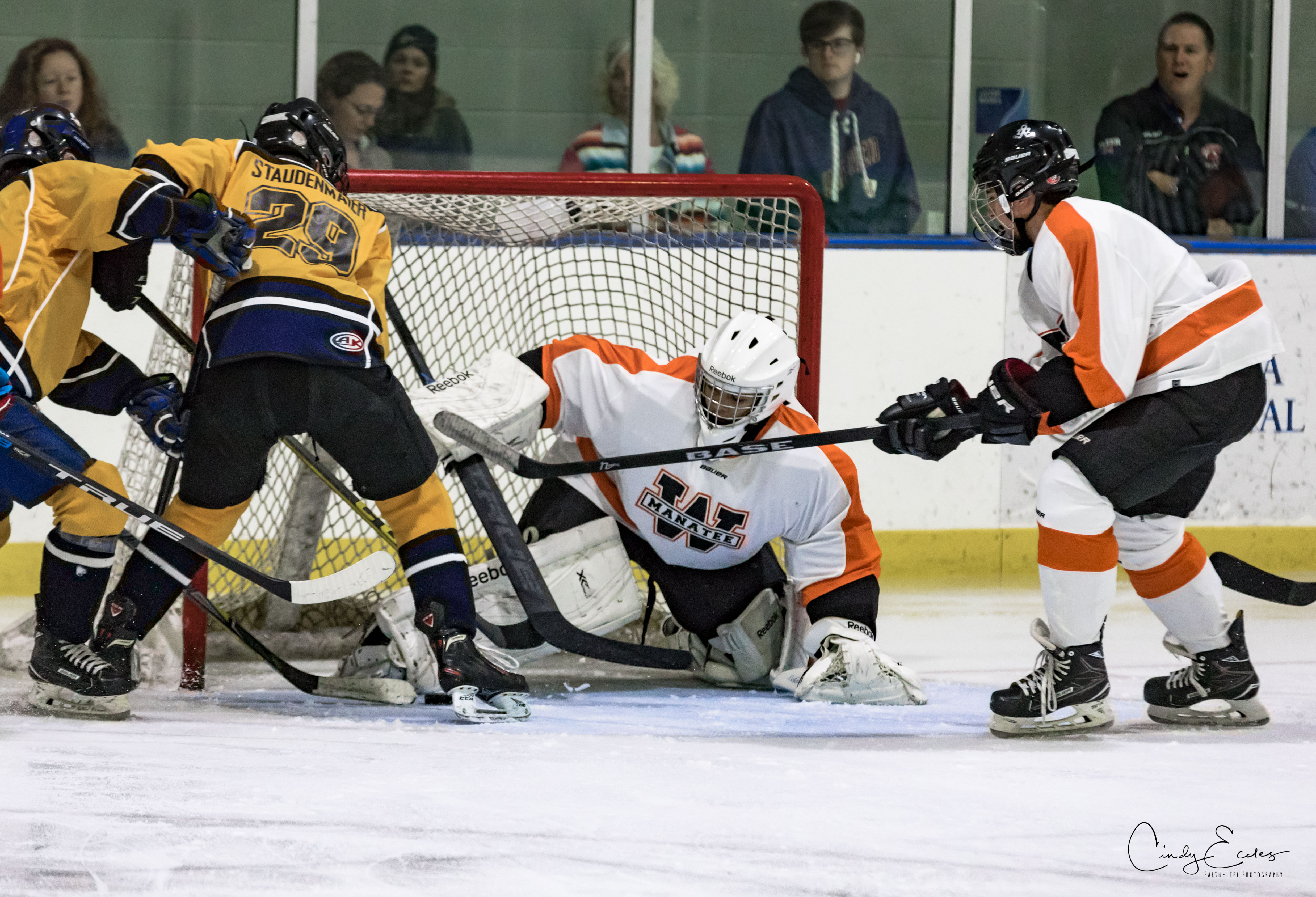 Two teams coming off of a loss are set to meet down in Ellenton tomorrow night for an 8:15pm face-off. The Newsome Wolves and West Manatee will take to the ice against each other for the first time this season, and this also marks the first meeting of a back-to-back matchup for the Modin Division rivals. Things are certainly heating up in that division, too. After these two teams finish the two game series, they will meet again on Friday, February 2nd. Newsome’s dynamic blue liner in Xander Pivovarnik will look to inspire his teammates and jump West Manatee for fourth place in the division. While Newsome has lost five games in a row, the Wolves are capable of taking teams by surprise; especially if the team’s goaltender Jacob Weaver is healthy and between the pipes.

West Manatee has made commendable strides for the LHSHL’s expansion team this season. The Fly Guys have proven that they can play a team-oriented style of play, and have surprised teams just as much, if not more than, Newsome has in the past. The Orange and Black’s, Oliver Appleyard and Jarrett Boehm, will need to find the score sheet early and often to help West Manatee inch that much closer to a playoff berth. Still, this could be a goaltender’s dual, and West Manatee’s David Josephson will look to collect his fifth win on the year.

The Steinbrenner Warriors have been one of the hottest teams as of late in the LHSHL, but the Warriors will look to bounce back against the Palm Harbor Hurricanes at TBSA on Friday night. Steinbrenner was shutout for the first time in almost a month after the team lost to Jesuit 2-0, last week. Though, the Warriors’ last win came against this same Palm Harbor squad (4-2) just before the Thanksgiving Holiday. The usual suspects for Steinbrenner, such as William Sorsby, Kyle Ciaccio and Kevin Holman, will look to lead the Warriors against Garrett “Toe Jam” Toenjes and company. Steinbrenner is currently four points out of a playoff spot behind the River Ridge Knights (17pts) in the Bradley Division. 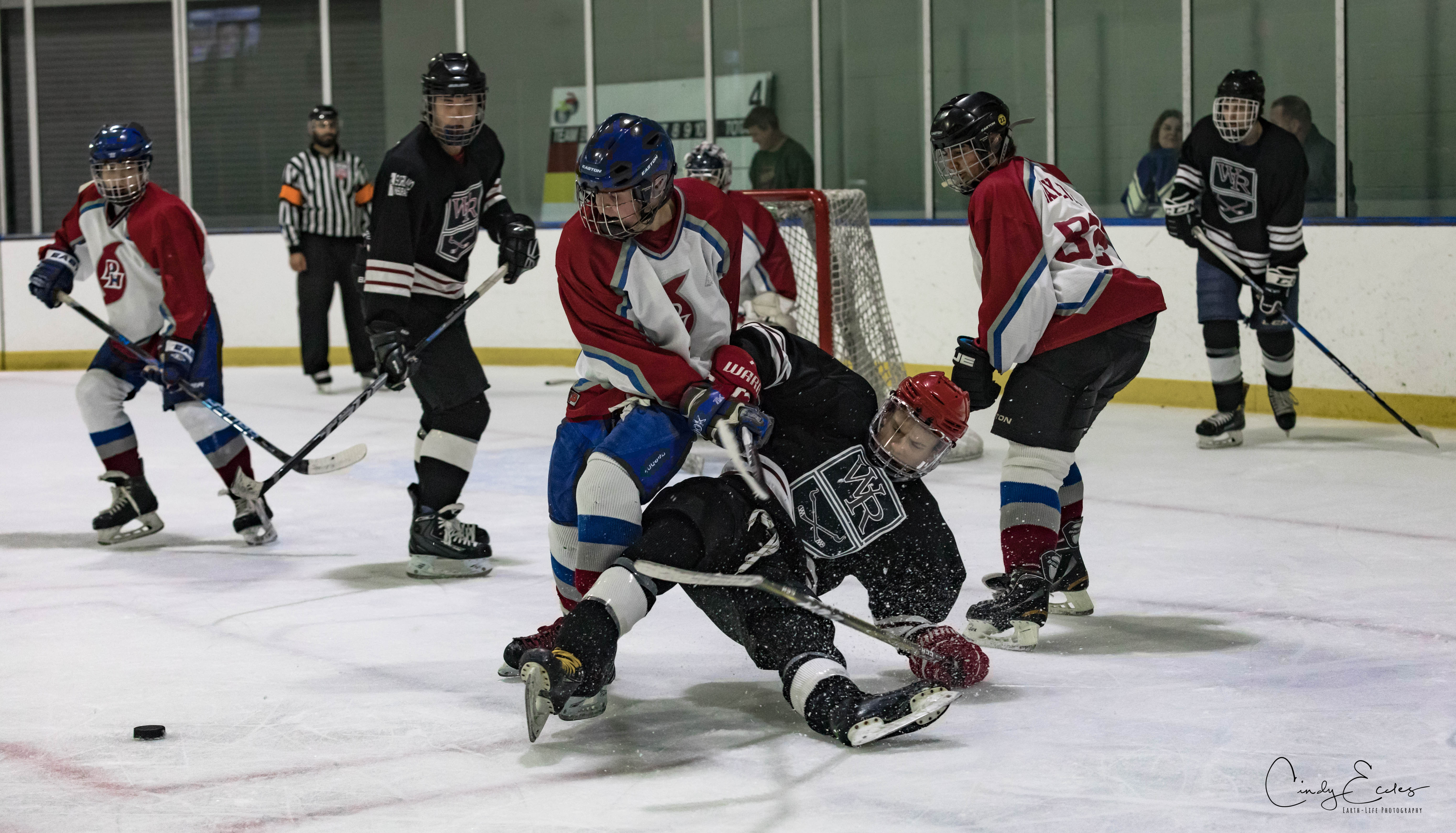 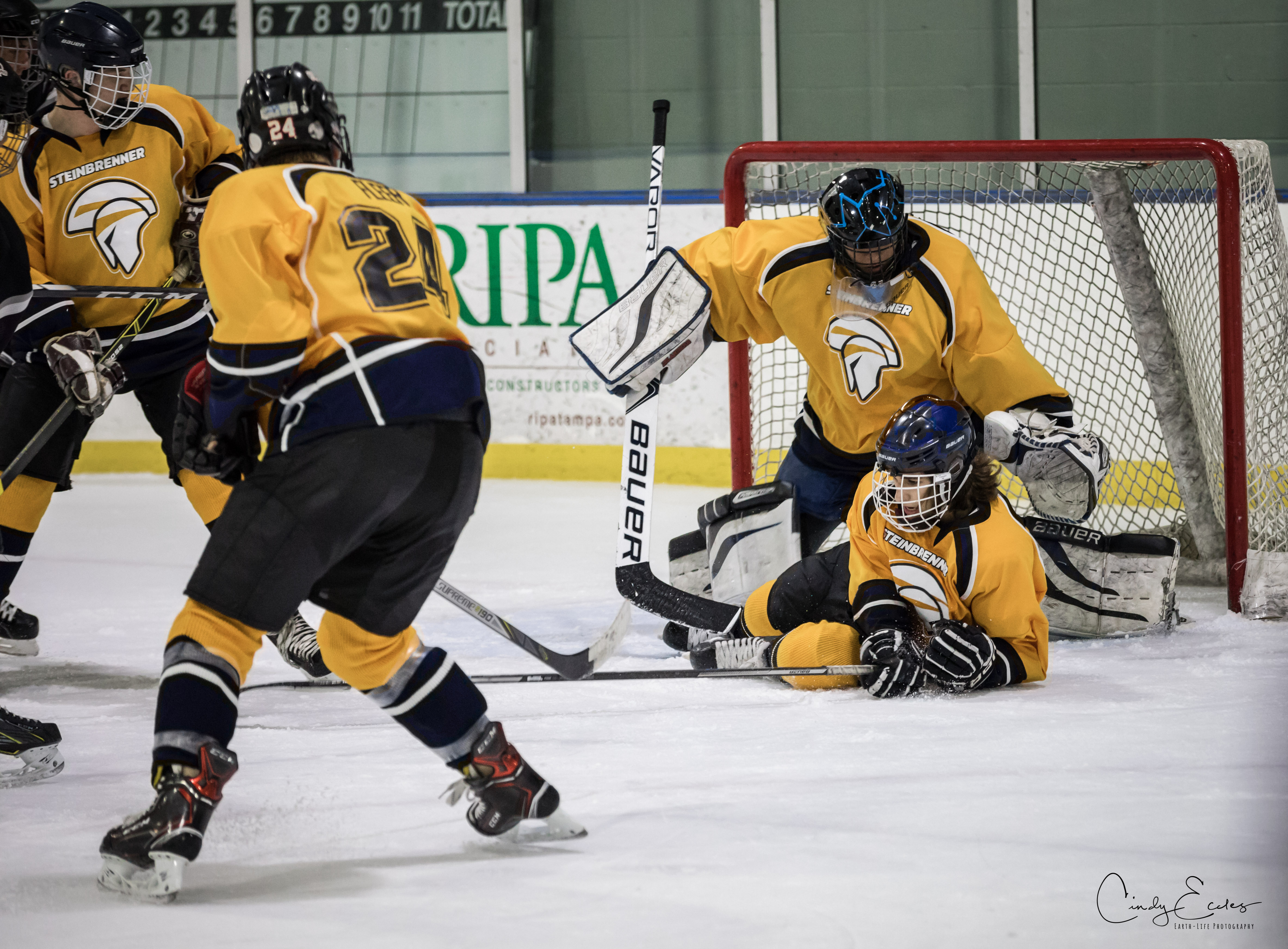 Palm Harbor is in need of a victory, as the Hurricanes will look to snap a three-game losing streak. With Berkeley recently winning, Palm Harbor is only three points ahead of the Buccaneers for the Lecavalier Division’s final playoff spot.

Ellenton will play the role of host for a Modin Division showdown at 9:45pm between the Bloomingdale Ice Bulls and East Manatee Admirals. Bloomingdale hasn’t lost a game in the team’s last five contests and has officially turned its season around. The Bulls are fresh off of a tie to Durant (2-2) last night, but for the first time this season Bloomingdale will face-off with the LHSHL’s top team in the Admirals (30pts). Goaltender Alexander Higginbotham will have his hands full vs. the league’s top scoring offense, but perhaps Andrew Miranda and the Bulls can pull-off a statement win?

Still, East Manatee recently lost its second game (5-2; Jesuit) on the year and one can only imagine that the Admirals will want to collect two points more than anyone else in the league. The Admirals have 132 Goals For on the year, and have only been limited to four-or-less goals in a game on three different occasions this season. Sure, senior forward, Patrick Kenefick will look to get his Admirals back on track, but forward Connor Nicholson could be an x-factor for East Manatee in this Modin Division rivalry.

Yes, the Berkeley Buccaneers are coming off of a big win last week, but the River Ridge Knights will be a tough test for senior Anuj Bhatia and company. River Ridge has been streaky lately, however with players such as Dylan Hultberg, Anthony Lioacano and netminder Daniel McCarthy – expect the Knights to find their winning ways sooner, rather than later. The last time these two teams, River Ridge defeated Berkeley by a final score of 8-3 (September, 22nd); and skaters Derian Brown and Hultberg combined for four goals (two goals each).

Still, that was a different Bucs squad. One the LHSHL’s up and coming stars would be Berkeley’s masked man, Heath Chancey. The freshman has been tested all season, and has proven he’s capable of stealing two points for his Bucs. If Chancey is between the pipes for Berkeley tomorrow night, than this contest could be another close one for the Bucs.

An intriguing matchup taking place at ISF tomorrow night for a 9:45pm puck-drop would be that of the Freedom Patriots and Jesuit Tigers. This will mark the second of three meetings between the Andreychuk Division rivals, as Jesuit defeated Freedom 11-4 back on October 13th. The Patriots are winless in the team’s last four games, so Owen Barno and company are due for a win and in division play. Until Freedom’s last outing, the Patriots were struggling to find the back of the net (7-7; Seminole). However, the team will look to ride the offensive momentum from its last game and stun the Tigers. 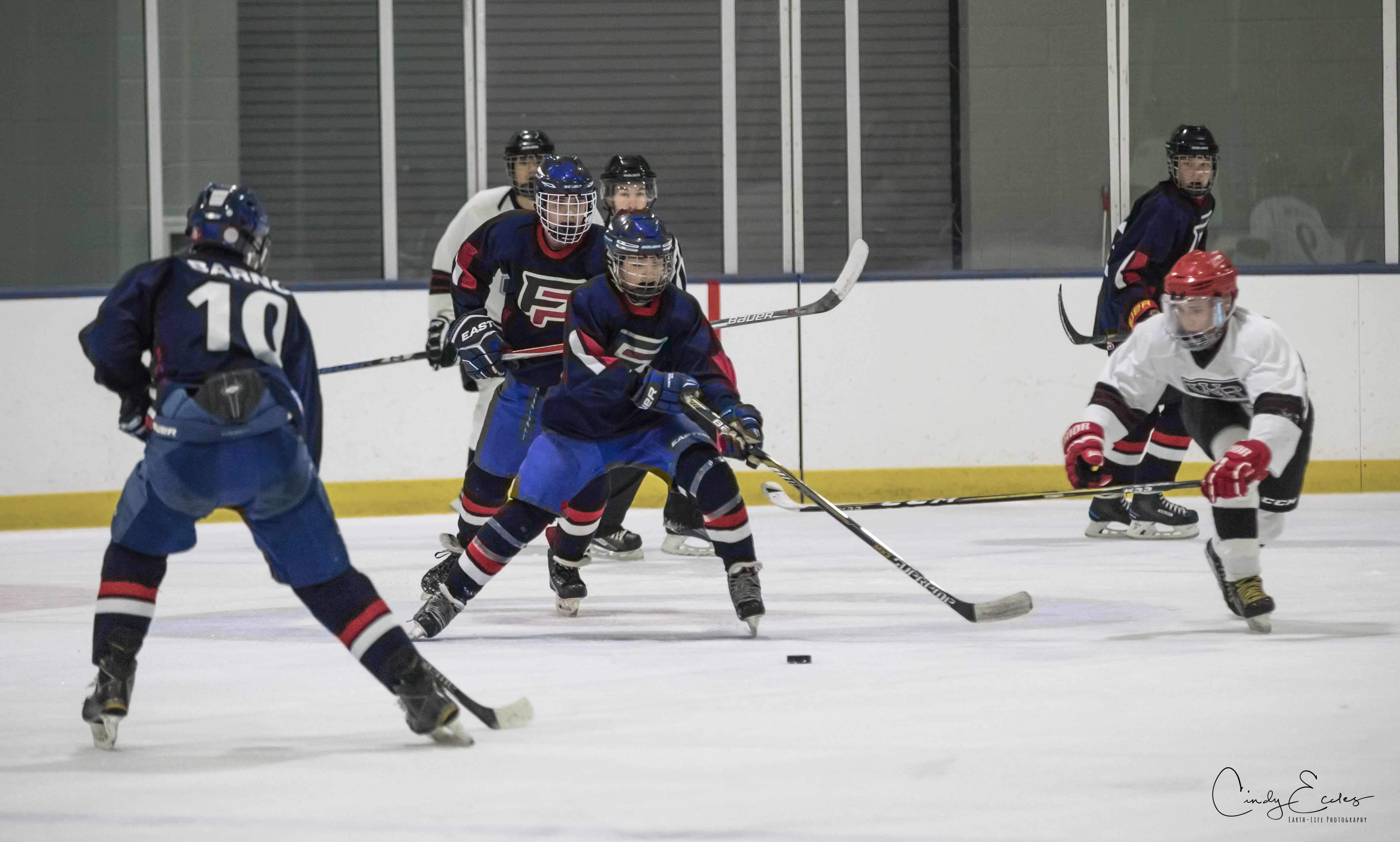 The Tigers defeated East Manatee last night (5-2) and are the only team to win a game vs. the Admirals this season. Jesuit enters the contest riding a three-game winning-streak, while outscoring opponents 17-4 during that streak. Though, Jesuit goaltender Paul Coats continues to shine for the Tigers. He’s been the team’s lone netminder all season and has proven that he’s one of the league’s top players between the pipes. Let’s not forget about forward Joshua Burke or Nolan Forrest, either. Both of those skaters have combined for over 80 points this season.

Game of the Week

The Durant Plant is back in action come Friday night at the Brandon Ice Sports Forum (ISF) and for the LHSHL Game of the Week. The two teams recently met, but it was the Plant Panthers who shutout the Durant Cougars (1-0) three weeks ago. The last contest between these two teams was as even as one game could possibly get, but Durant may have other plans this time around… 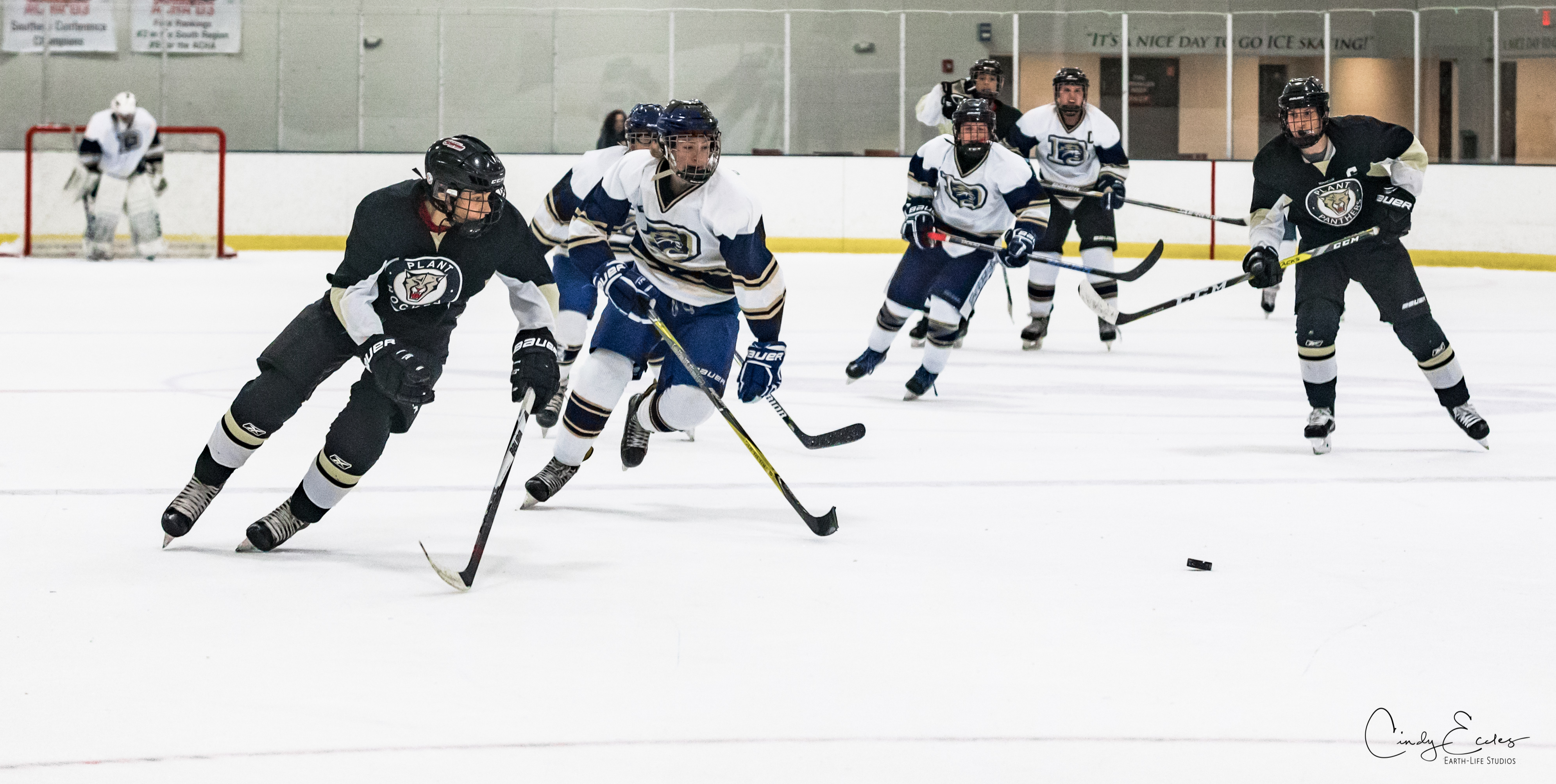 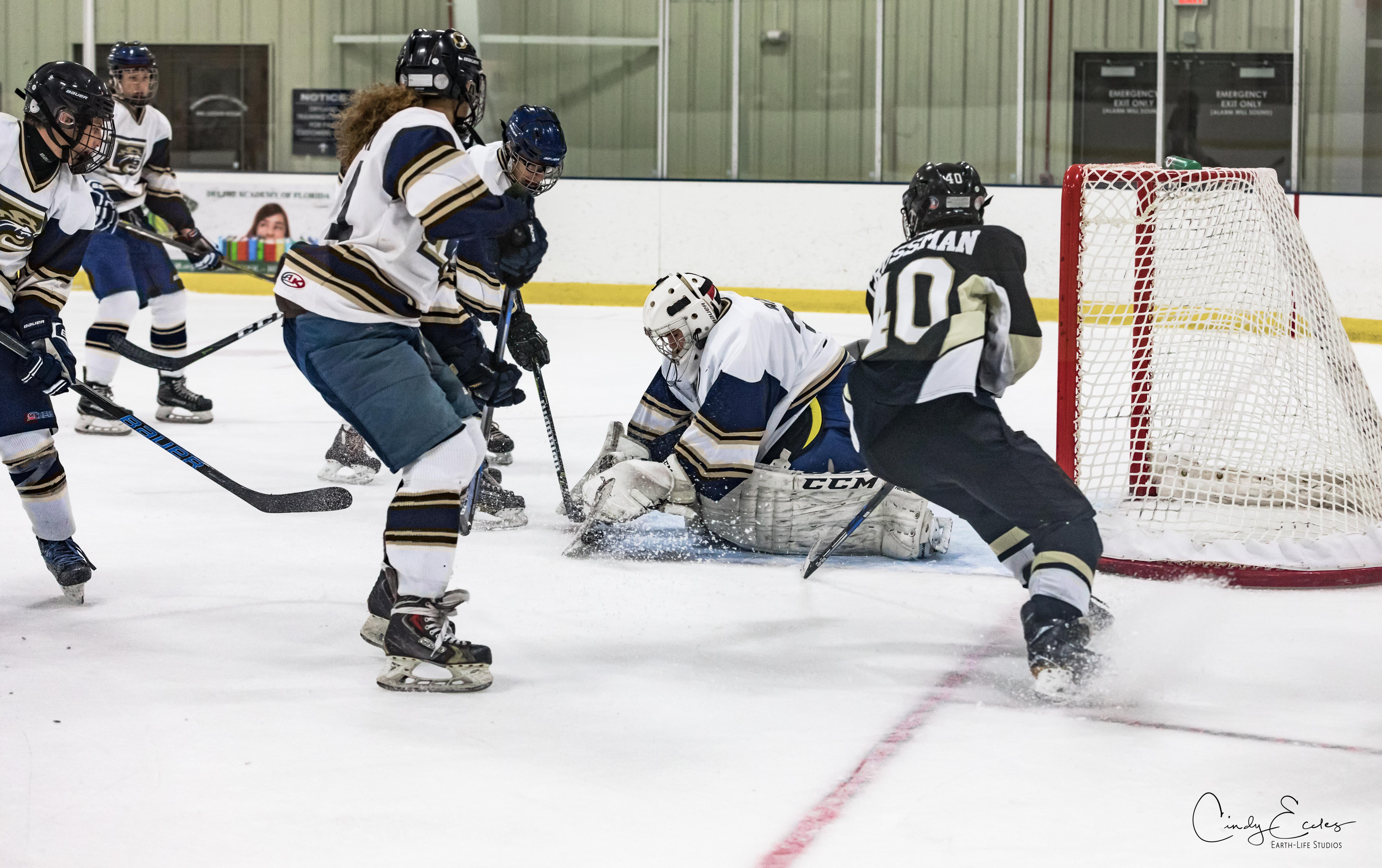 Plant’s goaltender in Troy Burkhart will look to continue to backstop his Panthers to another victory. Plant has been one of the LHSHL’s biggest surprises this season, and it appears that there’s no stopping the Panthers. Plant has won seven of its last eight games, and the team’s only loss during that stretch was to East Manatee (first place in the league). Hamilton Reese (14G-5A – 19pts) has been getting on the score sheet early and often lately, and you can be sure that number “87” will be in the box score if Plant finds a way to get the puck past Durant’s Dillon Garasz. Still, Plant’s Andrew Behrenfeld (5G-6A –11pts) or Jacob Grossman (4G-4A – 8pts) could be x-factor’s in this matchup, too.

Durant will play in its second game on the week, but that shouldn’t play a major role in team’s performance level on the ice. The last time the Cougars played back-to-back games in the same week was when they fell to Plant 1-0, as mentioned above. Durant tied Bloomingdale last night (2-2), so Aiden Kennedy (9G-6A --15pts) and company are warmed up and ready to take to the ice in the Game of the Week. Keep an eye out for Durant in the second period of play, as a majority of the team’s goals (28/60) have come during that frame. The Cougars are 2-1-1 in their last four games, and this contest marks the first of the team’s next six games which will played at ISF.

Puck-drop is set for a prime-time start of 8:15pm at ISF.