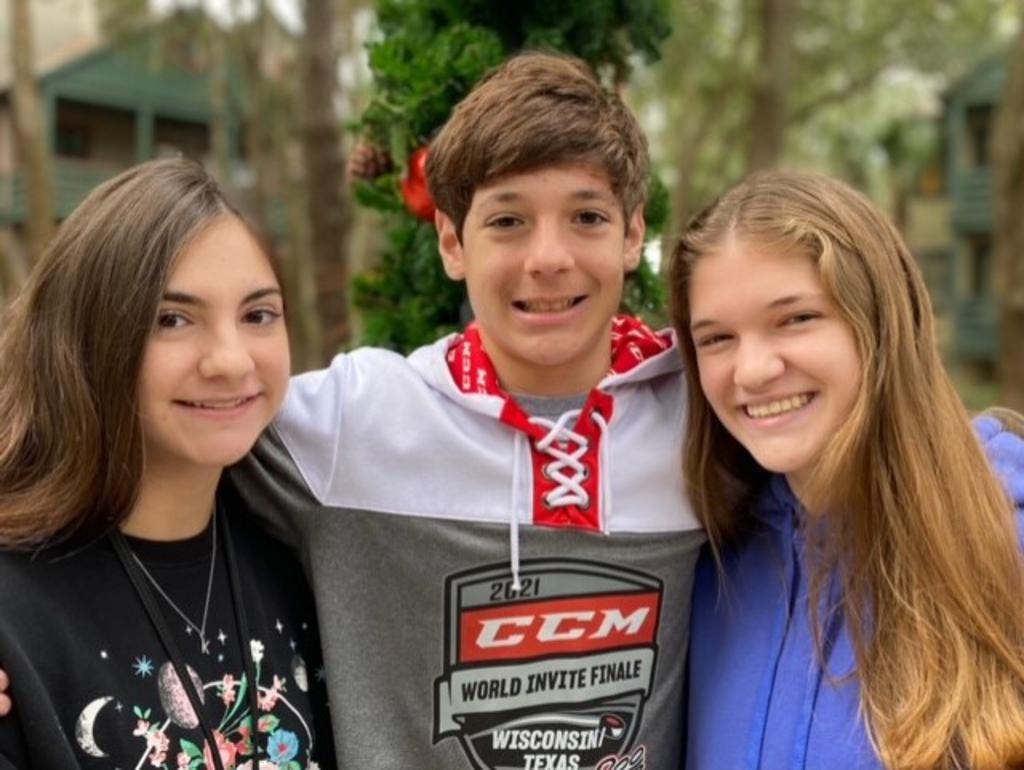 After a year away from content, the Lightning High School Hockey League is pleased to announce the return of articles showcasing players from each of our varsity organizations that participate in the league. Like past seasons, a league official will showcase one Freshman and one Senior from each team if the team has either. A league official will have the privilege of collecting written responses to preselected questions from each of these players, and then sit down and talk to the players in a two-part interview consisting of questions that highlight both the on-ice performance of the player, as well as the characteristics that make that player who they are when they’re not getting ready to hop on the ice for their next shift. These articles will be known as Freshman Focus and Senior Spotlight.

Hayden Hutner has entered the LHSHL with a bang. Through 14 games, he boasts getting on the scoresheet 19 times through 7 goals and 12 assists so far this season. Tied for fourth on the team in total scoring, he brings a high-octane level of play to his offensive rushes but is credited by coaches as reliable in all three zones of the ice as a shut down player that manages to get the puck into the other team’s end on a reliable basis. This level of play is characteristic of what it takes to bring success to a team, and while his high school career is just beginning, he has found success as a member of the U14AA Ice Bulls that earned the honor of number one ranked U14AA team in the nation early on in their season. As the league official that most commonly represents the league at Advent Health Center Ice, River Ridge’s home rink, I’ve had the luck to watch Hayden play many times this season and I’m using my time now to issue a warning to the rest of the league. Know who this kid is, know his number, and know where he is on the ice, or for the next four years you’ll be finding him in your defensive zone with his arms raised, a referee pointing at the net, and the score keeper saying, “Another one for number 9.”

I had the pleasure of talking to Hayden on the phone a few days before New Years as he was on the way up to a tournament in Nashville with his top ranked travel team. Each spotlight article consists of me emailing questions to the players beforehand so they can be prepared for general topics during the interview, and surprising the players with five to ten ice breaker style questions I’ve dubbed “Quick Release Questions”. I tell the players to answer with whatever comes to their mind first, and I feel like it gives a pretty good insight into who these kids are when they don’t have a helmet on. Take a glimpse at Hayden’s take on the questions.

What High School do you go to? I go to Cypress Creek.

What’s the best and the worst pizza toppings? I love sausage, and I’ve gotta say the worst is onions.

Do you bring lunch to school or buy it and what’s the best lunch? I bring it. The best lunch is always a turkey sandwich with cheese and a side of grapes or blueberries.

You’re on a 2 on 1 with either Kucherov or Point- who do you want with you? If I have the puck, Point. If they have the puck, I’d say Kucherov. He’s the better play maker.

What’s your favorite movie? This is a tough one, but I’d say it’s either Skyscraper with Dwayne “The Rock” Johnson, or the new Marvel movies. 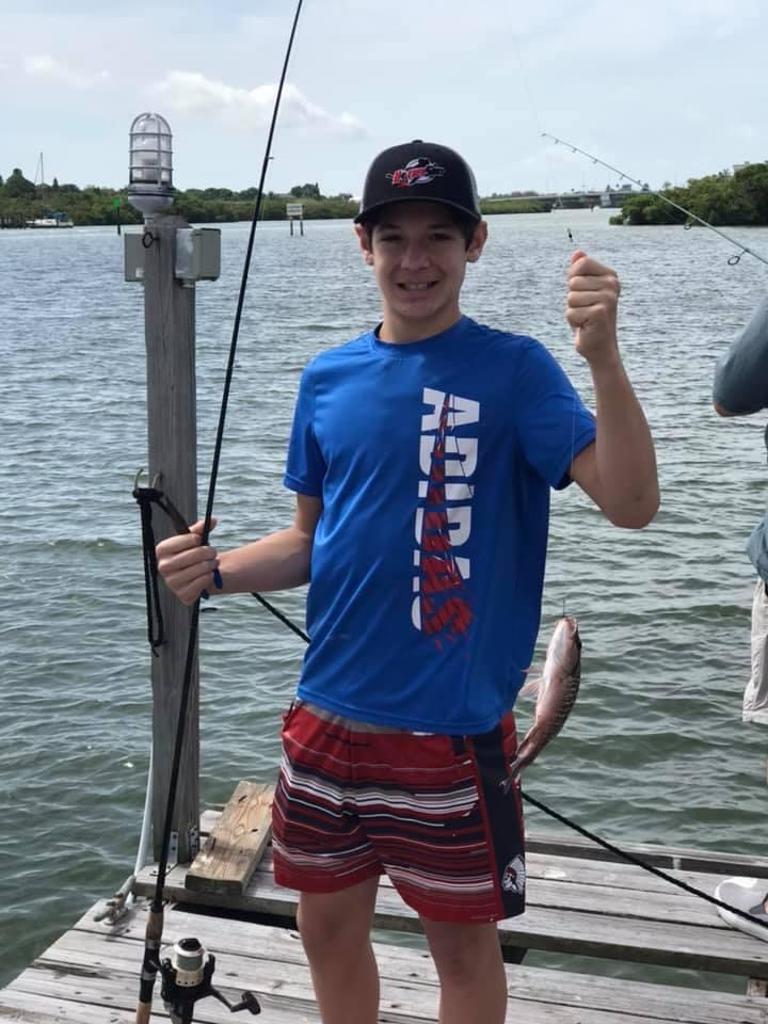 After a shared laugh over me not knowing Brad Marchand’s, apparently well known, government name, we jumped into the more serious side of the interview. I started with asking Hayden about his thoughts on the league so far, and what it was like playing on a high school team, “It’s been great playing for River Ridge and meeting new people. For my hockey career up until this point, I was used to playing against kids my size, age, and skill level, but now I sometimes line up against kids that have full grown beards. My favorite thing can be playing against travel teammates though because so many people in this league are unpredictable, but I know what to expect going against them sometimes and it pushes me to skate just a little bit harder.” On the topic of River Ridge and what it’s like playing for them, Hayden had great things to say about the locker room, “I’m really appreciative to all the upperclassmen. They’ve all been welcoming and encouraging and have helped me adjust to high school. Erik Laflamme and Kevin Dionne have been big leaders to me, and they have helped me calm down before games and make it feel like it’s just hanging out with friends. Hockey is chaotic and high school can be really intimidating because sometimes I’m playing against my U14 teammates, and other times I’m looking up ice at a senior with a full-grown beard.”

My next set of questions were based around how Hayden identifies himself as a hockey player, “To start, I think that I’m a reliable 200-foot player. I enjoy shutting people down in my zone just as much as I do setting up my teammates in the offensive zone. I’m a pass before shoot kind of player, and I think part of that leads to me rarely getting scored on when I’m on the ice. Hockey is a hard game, and the hardest part about it is giving that little extra push when you’re at the end of a shift, but I try to love those moments.” Hayden averages almost an assist a game, and I asked him to describe his favorite play in recent memory, “I was breaking into the zone on the powerplay, and I was going down the half wall. I pulled up at right about the hashmarks and did a spin and passed the puck to a player right on the back door who tapped it in.” Hayden’s favorite player is Brayden Point, and the saying that imitation is the highest form of flattery must hold true because there are constant shades of Brayden Point every time #9 on River Ridge enters the offensive zone with room. On the topic of #9, Hayden says that Gordie Howe was his dad’s favorite player, and he wears the number to honor him. I am pleased to report that Hayden Hutner only has 5 penalties this year, all minors, and has not attended a disciplinary hearing for fighting in the LHSHL, so let’s just hope he watches more film on #21 more than #9. 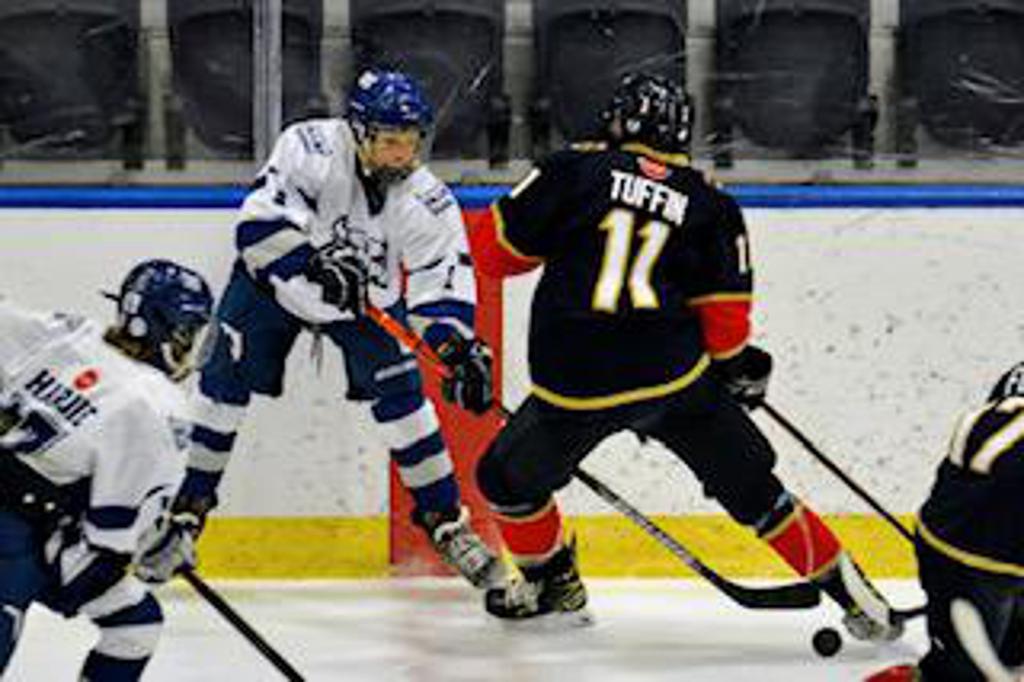 Outside of hockey, Hayden has a good head on his shoulders, “I have a few goals for the next four years of my life. I want to finish high school with a high GPA first, and I want to set myself up to play hockey at the highest level I can. I would of course love to play in the NHL one day, but realistically, I want to go to college no matter what, so my dream is NCAA D1 right now. My favorite classes are the science ones like biology so that opens up opportunities outside of hockey for a career, but I’m just trying to enjoy school for now.”

I asked Hayden to give a message to himself four years from now, and to thank anyone he is grateful for to end the interview, “To myself I would say make sure you’re finishing high school without getting lazy. Don’t give up on the GPA and treat it like it’s the end of a shift- finish hard. Don’t get too cocky and be a leader to the incoming freshmen like you have had leaders in your life so far. In terms of who I’m thankful for, it starts with my parents. They’ve traveled with me all over Florida and the country so that I can play this support and they provide everything I need. They’re always willing to make sacrifices for me. I’m also thankful for my friends, I have too many to shoutout and don’t want to forget anyone, but hockey wouldn’t be fun without them, and simple things like playing basketball in my neighborhood or hopping on the Xbox and playing NHL22 wouldn’t be the same.”