Legends of the League: Lucas Sowder and Nate Smith 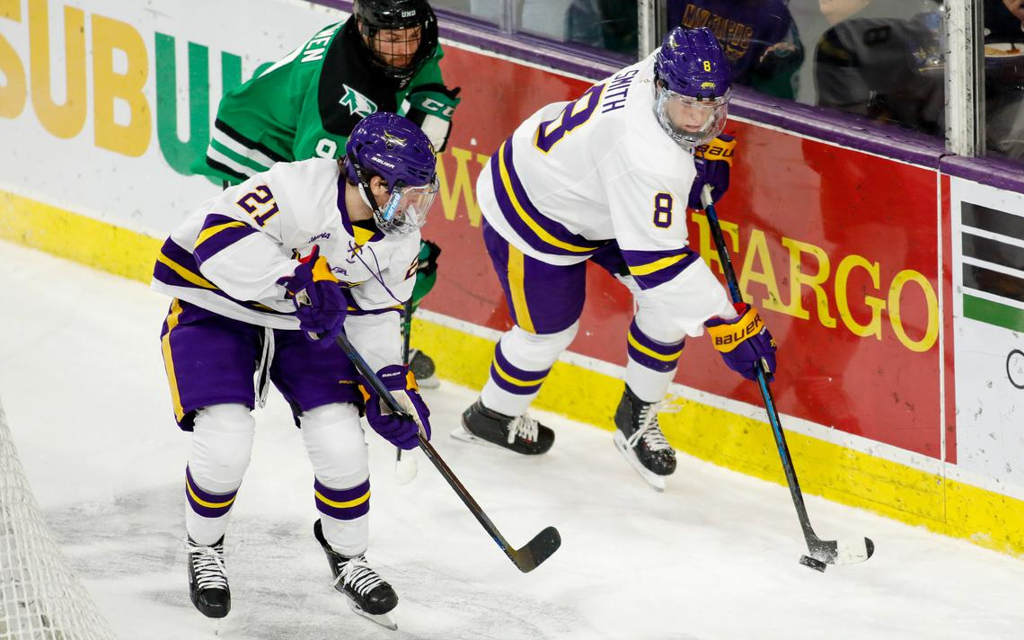 Lucas Sowder and Nate Smith. For people that have been around hockey in Florida long enough, that’s all I would have to say to introduce you to this article. We’ll pretend you have no idea why those names are important. I’ll humor you. Coming off a season in which the Lightning High School Hockey League had the Seminole Sharks go 21-1, I’m sure you think you know what a juggernaut looks like in the local hockey scene. I’ll put it this way, if you don’t immediately have second-hand shock from knowing a family that was personally affected by the Sowder and Smith boys absolutely dismantling whatever roller or ice hockey team they were playing against, you’re missing out on an integral piece of hockey history in the Tampa Bay area. From playing Mites roller hockey in Tampa Bay to both making the WCHA (NCAA D1) All Rookie Team their first year at Minnesota State University and leading the Mitchell Mustangs to the 2015-2016 Combined National Championship somewhere in between, these two are Legends of the League. 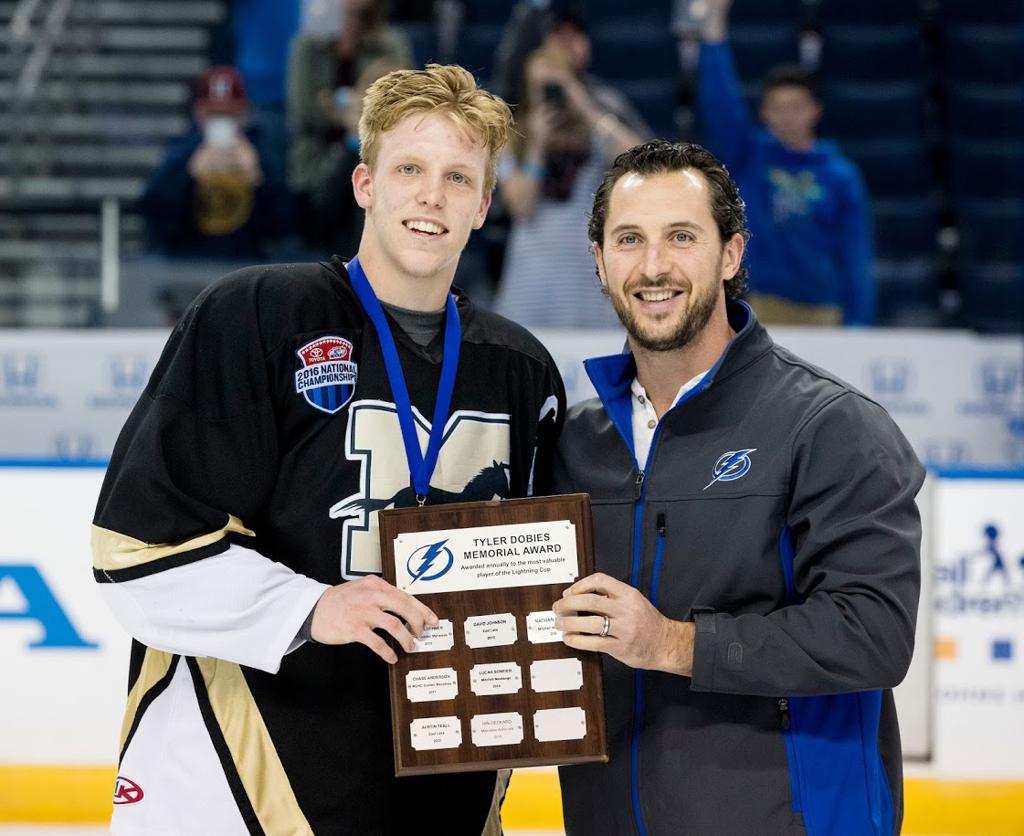 Before we jump into the bulk of things, I want to level the playing field by putting everything into perspective, so we’ll run through some numbers. The LHSHL and Tampa Bay hockey in general has grown every year and we’ve celebrated five years of the LHSHL with the conclusion of the 2019-2020 season. This season our scoring title was awarded after Jake Richard had a fantastic freshman campaign of scoring 23 goals and 26 assists for a total 49 points through the regular season. Let’s reel things back to the 2015-16 season. The LHSHL was fresh and young and teams were eager to cement themselves as powerhouses in a newly organized high school league sponsored by an official NHL organization. Mitchell did just this by going 21-0-1. Keep in mind their one tie came in a game where they had a total of 7 skaters after calling up an extra JV forward plus their JV goalie, but the numbers that should stick in your mind while reading this article are 208 and 32. In the 2015-16 LHSHL season, Nathan Smith and Lucas Sowder wore the Mitchell uniform in 32 games between themselves. In those 32 games, they combined for 208 points. Sowder had 54 assists and 68 goals for 122 points in 17 games while Smith had 41 goals and 45 assists for 86 points in 15 games. If you’re like me and you can get confused when letters and numbers come together, I’ll leave it at this. These two are scary and good at hockey. 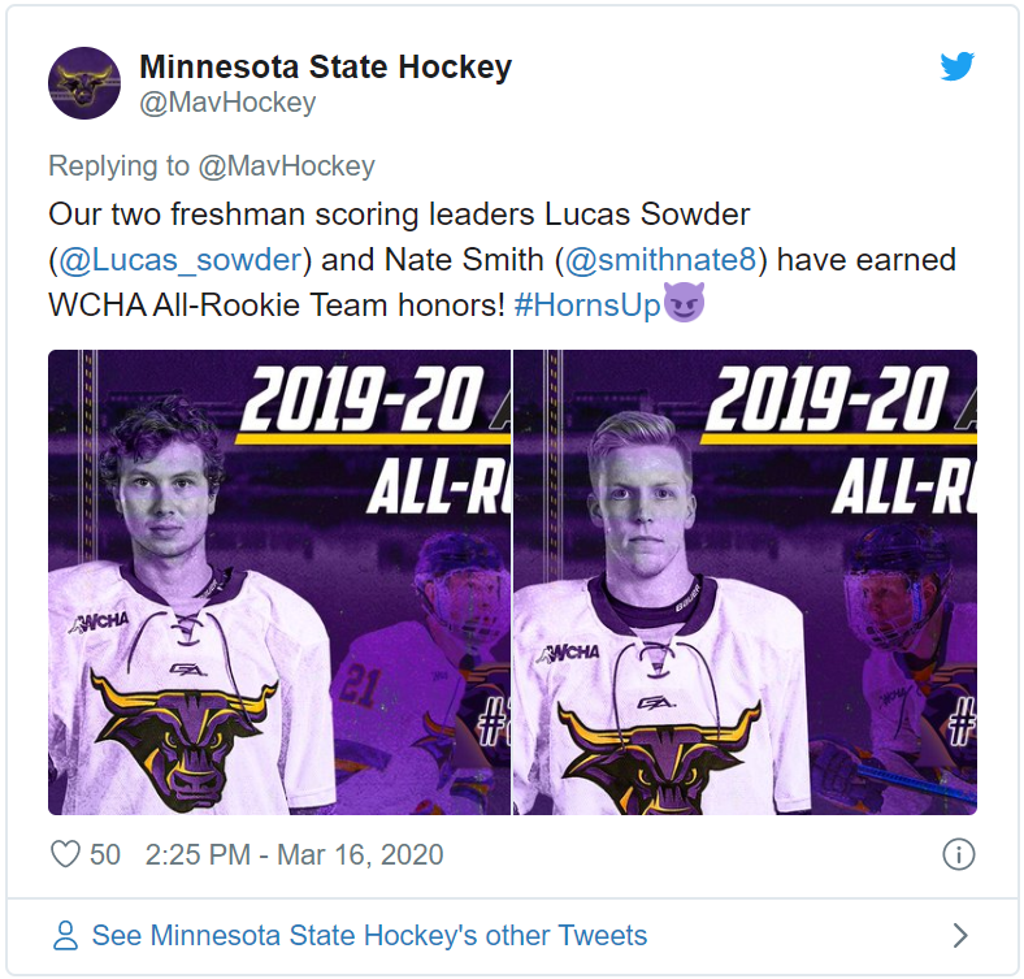 We’ll rewind the tape to when it all started, a time in which the most intimidating thing about this duo was deciding what the post-game snack for their kindergarten age roller hockey team would be. Sowder and Smith started their journey together roughly fifteen years ago when they both laced up their skates together for the first time. Although being familiar with the age thanks to our Learn to Play programs, I’m almost certain it wasn’t Nate and Lucas doing the actual lacing up, rather it’s more likely parents Kelly Smith and Ralph Sowder had that job early on. I chatted with both last week to get a better understanding on how this saga began. Lucas’s father Ralph explained, “Lucas and Nathan played eleven years of youth hockey together starting at age six in Roller Hockey and up through the LHSHL.” As noted by scouting reports, a trademark skill of both Sowder and Smith has been their stick handling and passing ability. This is a characteristic of many ice hockey players that transitioned from roller as the nature of roller hockey circles around puck movement and stick handling. The transition for the boys didn’t happen until relatively late in comparison to many players that have made it as far as they have. Kelly Smith drew out the timeline for me, “Nate started playing roller hockey at a rec level at age six, but soon tried out for and made the Scorpions travel team which was coached by Ralph Sowder. The boys stuck with the organization through high school and made the jump from playing roller under the Scorpions umbrella to ice hockey when they were 11-12.” There is no question if the boys playing Tier One Juniors and NCAA D1 hockey was an accident. They decided playing college hockey together was a dream of theirs before they had even started playing ice hockey. By the time they started putting up numbers in high school, the door to higher level hockey was kept wide open by their willingness and drive to achieve the goals they put in front of themselves. 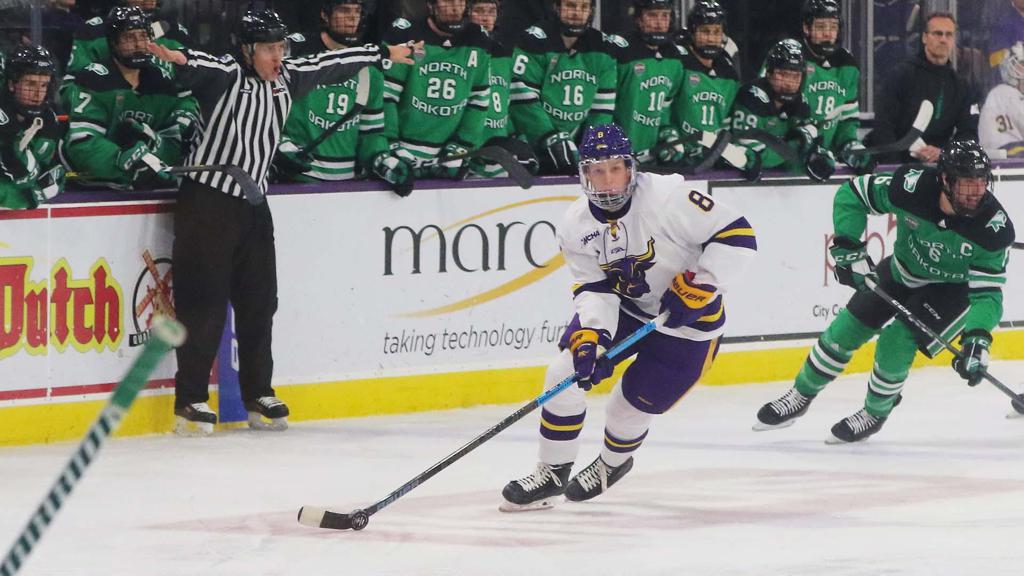 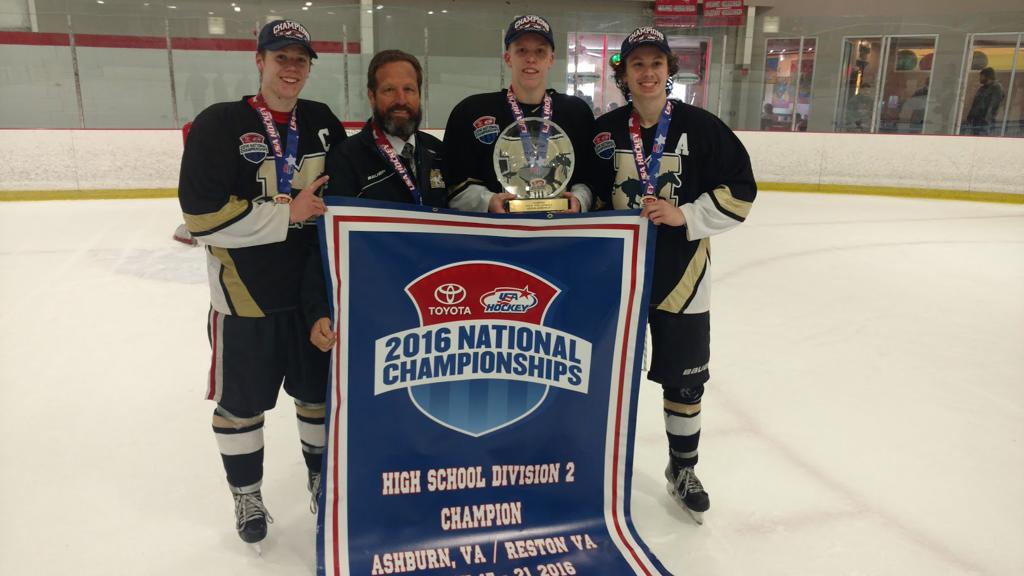 Their level of play by the time they were teenagers might have been the culmination of thousands of hours of travel hockey, video sessions, and shooting on nets in backyards, but high school hockey allowed the two headed beast that was the offense created by Smith and Sowder sharing the ice to be seen by everyone. I sat for a few hours and wondered, “What was the easiest way to describe exactly how strong these two were when they played for Mitchell together?” Do I quote scouting reports? Maybe reflect on their run to the national championship that involved a now long-lost SAHOF trophy? Insert a screenshot from the league record books? In the end I decided to throw in an anecdote about how dangerous their competition was. A curveball, I know, but hang with me. I played in the LHSHL its inaugural season and I was lucky enough to not play against Mitchell in our 22 games that season. We did, however, play against their rival Manatee once on our hunt to our terrific middle of the pack campaign. I remember huddling together in front of our net before puck drop and two words from our de facto captain’s speech will never be forgotten. He said to us, “Boys, tonight is all about damage control.” Not quite the hype up a rookie needed, but nothing he could have said there would have prepared us for that 16-0 beating which, in hindsight, was merciful. That same Manatee team went onto meet Mitchell at Amalie Arena for the Lightning Cup Final and as I sat in section 104 about ten rows from the glass waiting to see Manatee walk through this team I hadn’t seen all season, I was surprised at how uneasy the Manatee parents and fans seemed. This was the first time I saw the hockey players Nathan Smith and Lucas Sowder. They won 4-3, had six points together, and added 4 penalty minutes each, for flavor. I sometimes wonder what speech the Manatee locker room heard before their Lightning Cup Final that season, or even heard before they faced Mitchell at States, or maybe in the semi-finals at Nationals, but I imagine the seniors told their rookies a little something about damage control when it came to those Smith and Sowder guys.

The boys had made their mark on the youth hockey scene, but the next step to getting the boys to college hockey had to be answered. The boys went their separate ways. For those unfamiliar with the 10,000-piece puzzle that is junior’s hockey, I’ll try to clear the air. In Europe they’ve got it figured out. There’s youth hockey organized by age, junior’s hockey which is organized by age (U20, U21), Semi-Pro, and professional. In North America we try to be sophisticated, so have youth hockey by age, professional hockey by skill, and a mess in-between. USA Hockey observes three tiers of juniors organized not necessarily by age, but by pay to play status with Tier One being completely free, Tier Two being partially free, and tier three being pay to play. The USHL is our only Tier One league as boarding, equipment, and travel is free of charge. Players must be signed to a team via draft or contract to play. The NAHL is tier two and is most free but players must billet AKA pay for boarding in a home. Originally Smith planned on playing for Aberdeen in the NAHL but signed with the Cedar Rapids Rough Riders of the USHL when given the opportunity and spent two seasons developing there. I talked to Ralph Sowder on where Lucas decided to play, “It was an honor that the USHL and BCHL expressed interest in Lucas, but ultimately a phone call with Brian Bradley put a vote of confidence in the development process of the coach at Wenatchee in the BCHL” The BCHL is Junior A hockey and at roughly the same level of competition as its Tier One American counterpart in the USHL. Even though they went their separate ways for Juniors, the Smith family stopped in Mankato to visit Minnesota State on their way up to Cedar Rapids for Nate’s first season, “It was great to meet coach Hastings and Coach Knott and the facility as well as campus were beautiful.” Both boys ended up committing to Minnesota State within two months of each other during the fall of 2017. The following June saw Smith taken in the third round by the Winnipeg Jets in the NHL Draft. Sowder was not selected, however their statistics remain eerily close through a few seasons in juniors and having completed one NCAA season together. 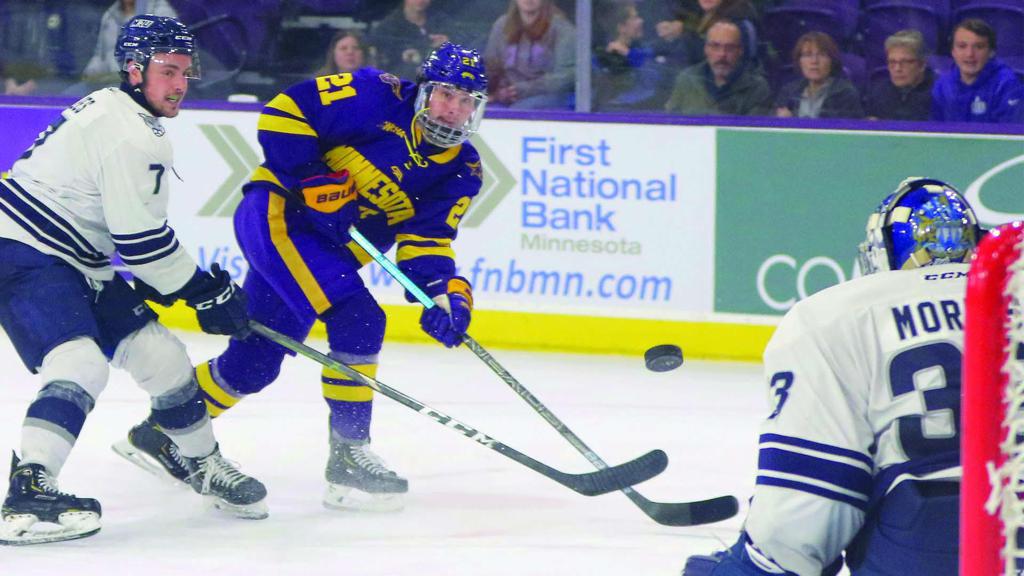 Their first season wearing the purple and gold at Minnesota State saw high commendations for both Smith and Sowder. Following the conclusion to the regular season, the Western Collegiate Hockey Association named both Sowder and Smith to their All-Rookie Team and the WCHA selected Lucas Sowder as their Rookie of the Year after playing in 31 games and scoring 6 goals and 25 points for a perfect point per game average and a +15 rating. He led the WCHA in rookie scoring and was fifth in the nation overall for rookie scoring plus was honored as the WCHA Rookie of the Week three times. The trust in Wenatchee’s development clearly translated to NCAA success as Sowder proved his captainship and leading his team to a BCHL Championship was no fluke. Nate Smith also was recognized as WCHA rookie of the week three times and played 35 games for the Mavericks registering 9 goals and 18 assists for 27 points while maintaining a +10 rating and winning 161 face offs. This follows two seasons in Cedar Rapids where he led the Rough Riders in points while scoring 53 points in 59 games his last season in the USHL.

The Tampa Bay hockey community has been privileged to watch Smith and Sowder play for as long as they have, and with the success they keep on dishing out, I imagine we’ll be able to see them for years to come. They have proven time and time again whether it be playing for the Mitchell Mustangs or catching ice time with the Minnesota State Mavericks, they know how to find the scoresheet. Each assist seems to be a sweeter pass than the last, and every goal seems to come when their team needs it the most. They’ve gone from being a rotated healthy scratch at the beginning of the season to securing plenty of playing time with a team that held onto the #1 spot in the NCAA Men’s Ice Hockey Power Rankings for several consecutive weeks. I believe that in the end Kelly Smith summed it up best, “Being apart for two years in juniors, it’s nice to see Luke and Nate together again in College. I know people at home are excited to see them play together again.” I’m sure just as many of us are happy that those two aren’t playing against us, but she nailed it on the head. If you haven’t had the pleasure to see these two play with each other, hop onto twitter and follow @MavHockey to get updates on Minnesota State Hockey and even if they aren’t your school of choice, join us in following the journey of two Florida boys who couldn’t care less about what the hockey world thinks about their background 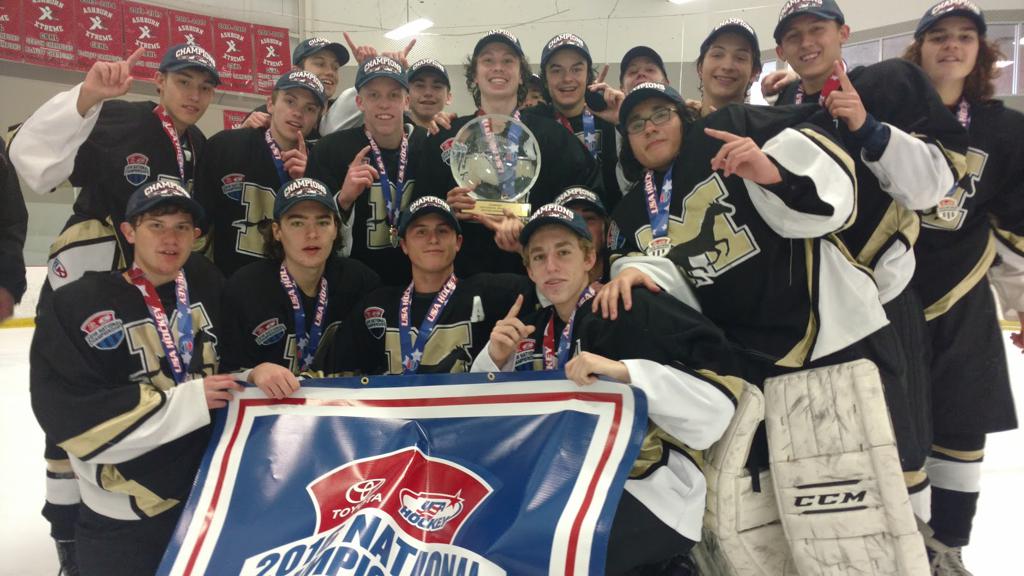